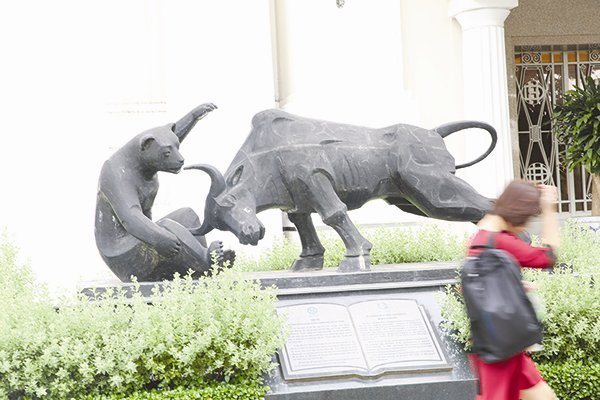 HCMC – Bank stocks performed positively on the Hochiminh Stock Exchange and helped the benchmark VN-Index maintain growth momentum, adding 14.23 points, or 1.15%, from the session earlier to close at 1,256.43 points today, May 5.

In the VN30 basket, 25 stocks gained ground, while only four declined and one closed at the reference price.

Petroleum stocks were also good performers. BSR soared nearly 12%, PVB and OIL surged over 7% and PVT and POW expanded over 5% each.

In the group of speculative stocks, ROS, FLC, HAI, ADM and PVD shot up to the ceiling prices.

The major contributors were petroleum stock PVS, which shot up to the ceiling price at VND21,600, and securities companies VND and SHS and property enterprise CEO, which rose between 2% and over 3%.

In the group of speculative stocks, securities enterprise ART shot up to the ceiling price at VND10,000, while food service firm KLF and property group HUT surged 8% to VND5,400 and 6.8% to VND6,300, respectively.

Lender SHB took the lead in terms of liquidity on the northern bourse, with 18.6 million shares traded.