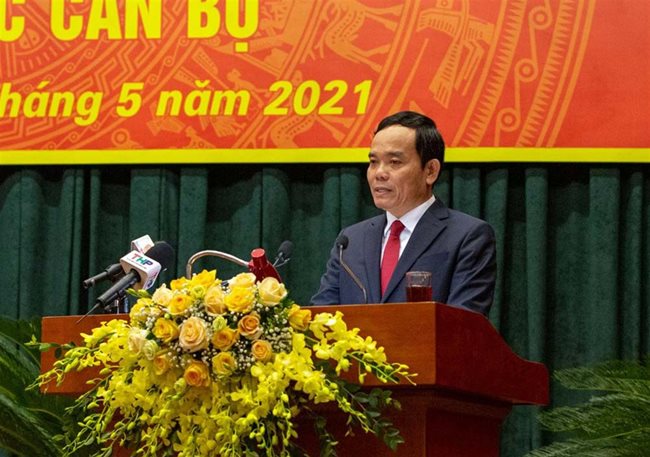 Tran Luu Quang, the new Secretary of the Party Committee of Haiphong City, speaks at the conference – PHOTO: HAIPHONG.GOV.VN

Quang received the Politburo’s appointment decision from Chairwoman of the Party Central Committee’s Commission for Organization Truong Thi Mai at a conference in Haiphong City this morning, May 4.

Mai congratulated Quang for becoming Secretary of the Party Committee of Haiphong City as well as Thanh for becoming the Deputy Prime Minister.

She said Haiphong City has achieved outstanding socioeconomic growth and been effective in controlling the Covid-19 pandemic.

Quang thanked the Politburo and leaders of Haiphong City for appointing him to this new post and assigning new tasks to him.

“I promise that I will do my best, focus on my work, continue learning, and together with other officials in the Executive Committee and the Standing Committee of Haiphong City Party Committee build a solidary executive board for the development and peace of this city,” he said.

Tran Luu Quang was born on August 30, 1967, in Trang Bang District of the southern province of Tay Ninh. He was a bachelor in mechanical engineering before obtaining a master’s degree in public governance.