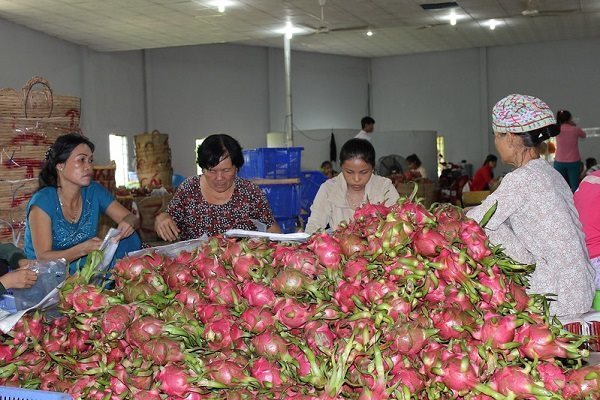 Farmers process dragon fruit. Vietnam exported vegetables and fruits worth over US$900 million in the first quarter of 2021, up 6.1% year-on-year – PHOTO: SGT

HCMC – Vietnam exported vegetables and fruits worth over US$900 million in the first quarter of 2021, up 6.1% year-on-year, according to data from the Import-Export Department under the Ministry of Industry and Trade.

The Covid-19 outbreaks were brought under control, smoothing the export operations, resulting in the growth in fruit and vegetable exports, according to the Import-Export Department.

The United States, Thailand, Japan and South Korea were among Vietnam’s major fruit and vegetable importers.

Vietnam saw its shipments of fruits and vegetables during the January-March period to Taiwan, Malaysia and Australia soar by 43%, 32.5% and 30.6%, year-on-year, respectively.

The United Kingdom-Vietnam Free Trade Agreement will take effect on May 1, which is expected to contribute to ramping up Vietnam’s exports of farm produce.

Vietnam has one million hectares of fruit plants, with an output of over 12.6 million tons. The country’s fruits have reached numerous markets.

Until date, the Plant Protection Department under the Ministry of Agriculture and Rural Development has granted 998 codes to areas that grow fruits for export to the United States, Australia, South Korea, Thailand, Japan and the European Union.