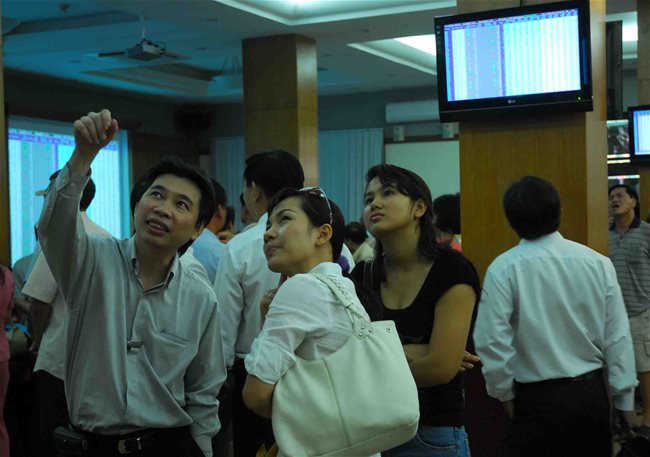 Investors watch stock prices at a securities company in HCMC. The benchmark VN-Index of the Hochiminh Stock Exchange lost 0.6% to close at 1,234.89 points on Thursday, ending its winning streak of eight consecutive sessions – PHOTO: TRAN LINH

A system error that occurred at around 11 a.m. also affected the investors’ sentiment on the southern market. The VN-Index lost 0.6%, or 7.49 points, from the earlier session to close the day at 1,234.89 points.

In the group of small and medium stocks, DLG, CKG, TDG, PXT and DLG shot up to the ceiling prices. DXG, DIG, ASM and GEX soared more than 4%.

On the Hanoi Stock Exchange, the HNX-Index went up 0.31%, or 0.91 point, against the previous session to close at 293.75 points, with 61 gaining stocks and 69 decliners. There were nearly 178.3 million shares worth more than VND2.9 trillion changing hands.

SHB led the northern bourse in terms of liquidity with more than 18 million shares changing hands.