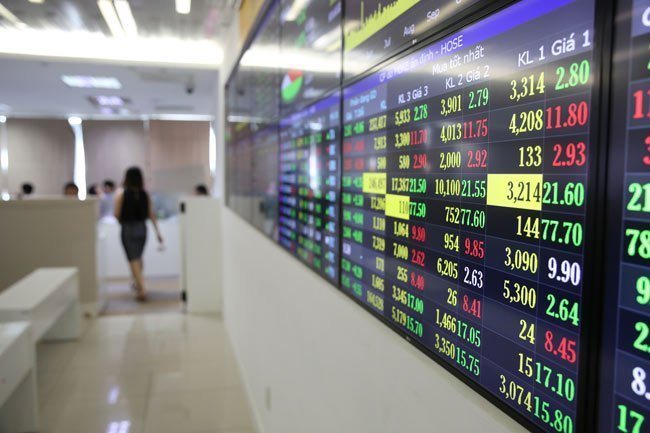 An electronic board shows stock prices at a securities firm in HCMC in this file photo. The benchmark VN-Index of the Hochiminh Stock Exchange rose 0.32% to close at 1,239.96 points on Tuesday – PHOTO: THANH HOA

HCMC – Although the strong selling pressure sent many stocks on the local market into the red, the VN-Index of the Hochiminh Stock Exchange recorded the seventh straight winning session today, April 6.

The benchmark index rose 0.32%, or 3.91 points, to close the day at 1,239.96 points although losing stocks outnumbered winners by 248 to 190. The reason was that losing stocks dropped slightly while winning ones increased sharply.

Lender SHB reversed course to end higher, closing the day up 2.1% to VND24,800. SHB was also the most actively traded stock on the northern bourse with nearly 25 million shares traded.

Petroleum stock PVS and property enterprise CEO, which surged 3.9% to VND24,300 and 5.5% to VND13,500, respectively, were among the main contributors.

Some other large-cap stocks such as SHS, VCS, TNG, MBS and NVB declined less than 2%.