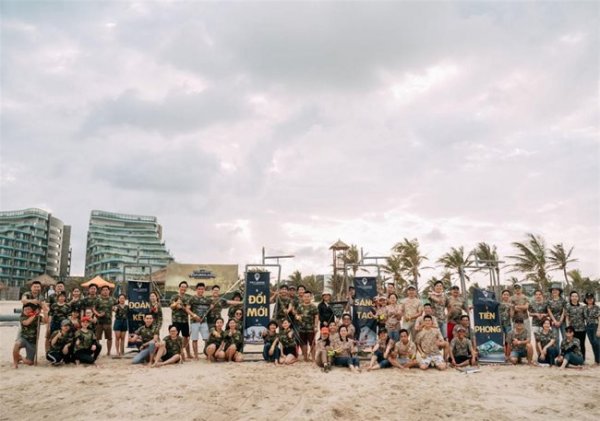 Viet Legend, an event and tourism company, organizes an event for its corporate customers in Danang City. Danang tries to boost MICE tours as a way to help its tourism industry recover - PHOTO: NHAN TAM

DANANG – The central city of Danang wishes to serve five million tourists this year, up 85% compared to 2020 by attracting the domestic tourism market, developing the night-time economy and promoting MICE tourism.

The department came up with 10 solutions that can help achieve the target, including completing the Danang City tourism development master plan to 2030, a vision to 2045 and developing new products and services, including a first night-time zone by the beach.

Truong Thi Hong Hanh, the department director, said that the restructuring of the tourism market and human resource training after a difficult year are important to revive the municipal city's tourism industry.

“To develop night-time tourism efficiently, we will closely connect with tourism businesses to organize night tours as well as night-time entertainment activities,” she said, adding, “We will conduct a pilot at some places such as Marble Mounts, Cham Museum and Ba Na Hills.”

Hanh added that in 2021, the city will boost digital transformation in tourism. According to tourism businesses, it is a good time for the city to organize programs in the context that more than 40% of businesses stopped their operations, while 62% recorded an 80-100% revenue decrease from January to September 2020.

“Until now, such numbers in a survey are still relatively accurate. Moreover, 50% of tourism businesses said they completely closed their doors, while 50% of employees said they do not want to return to tourism. This is really a challenge,” said Nguyen Duc Quynh, General Director of Furama Resort Danang and Vice Chairman of Danang Tourism Association.

Quynh said that his Furama Resort Danang, Furama Villas Danang and Ariyana Convention Center Danang had been home to 800 employees, but only 200 are still employed.

Speaking with the Saigon Times on the sidelines of the event, Tran Luc, Deputy Director of Saigontourist Travel Company’s Danang Branch, agreed that Danang should develop MICE tourism to take advantage of its strengths that can help companies earn much more money.