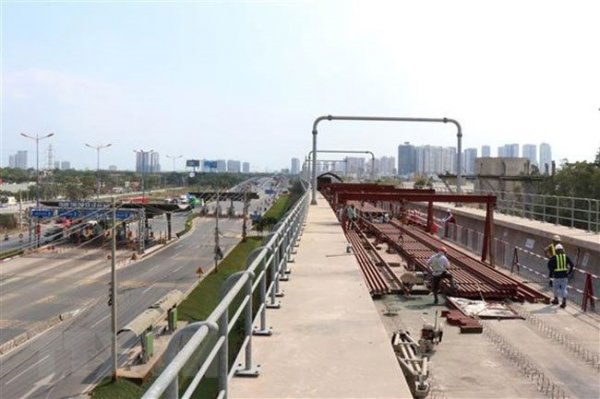 Workers at a construction site of a section of the HCMC’s first metro line. The city’s working team for incident reviews found one more rubber cushion of a viaduct displaced – PHOTO: VNA

HCMC – After a rubber cushion used for a girder of a viaduct of HCMC’s first metro line fell off, the city’s working team for incident reviews began to check the entire line and found one more rubber cushion of another viaduct displaced.

The viaduct with the rubber cushion that was recently found to be displaced was located at a section from Binh Thai Intersection to Thu Duc Intersection, Tuoi Tre Online reported.

The working team asked the contractor and the consultant of the under-construction metro line, which connects Ben Thanh Market in District 1 and Suoi Tien Theme Park in District 9, to give an explanation and address the incident.

Cushions are used to connect girders with pillars and act as a buffer.

On October 30 last year, during the inspection at the construction site of the Ben Thanh-Suoi Tien metro line, the Management Authority for Urban Railways of HCMC (MAUR) discovered that a rubber cushion used for a girder of a viaduct which was constructed in 2016 had fallen off.

Today, 17:01
Learn how to love the environment at Trạm Xanh

Today, 16:59
Zipline tour in Yên Bái is must-do for adventurers

Today, 16:25
Bach Thao Park A peaceful green heaven in the heart of Hanoi