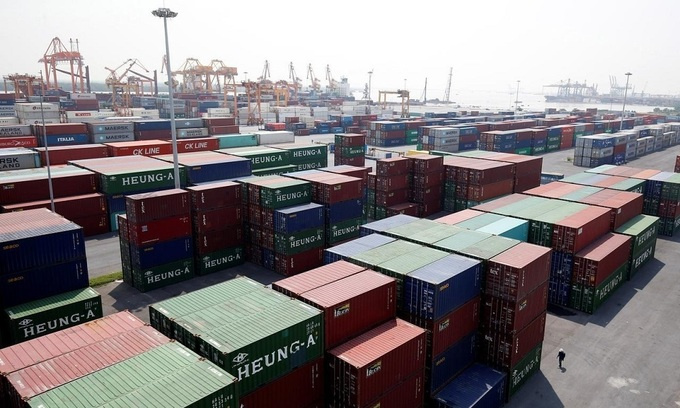 The Vietnam Maritime Administration (VMA) on Monday wrote to container shipping lines, instructing them to publicly declare their freight rates and surcharges, warning it would not countenance profiteering or unreasonable prices, which cause difficulties for exporters and disrupt the shipping market.

It has received numerous complaints about inflated prices due to a shortage of containers and ships.

Most shipping lines have hiked freight by 2-10 times in the last two months, depending on the sector. For instance, while it normally costs US$1,420 to ship a 20-foot container to the UK, it rose to $5,420 in November and $7,200 in December.

Phan Minh Thong, CEO of Phuc Sinh, one of the largest pepper and coffee exporting companies, said the cost of a container increased by 700 percent yet many of his orders were not delivered because “they were unilaterally cancelled by the shipping company.”

“There have been occasions when we reached an agreement with the shipping line at night, but were told in the morning it was cancelled because they received a higher bid. On some days we received cancellation notices for 40-50 containers.”

From shipping 40-50 containers a day, Phuc Sinh was down to three to five in November and December.

As a result, they had to buy less from suppliers, reducing from nearly 10 tons a month to three tons or less now though it is the harvest period for items such as pepper and coffee.

The Vietnam Association of Seafood Exporters and Producers has advises its members to have plans in place to minimize supply chain disruptions and export losses.

It had expected rising exports in the fourth quarter to take seafood exports for 2020 to $8.6 billion, but lack of containers and ships in the last two months could affect this.

Many are stuck at ports since they could not be emptied, while the pandemic itself has caused many shipping lines to go bankrupt, she said.

“The number of customers contacting Tan Thanh to rent containers has increased by 10 times from normal months. We have to reject a lot of orders because we cannot meet all the demand.”

Concurring, Thong also said shipping lines had to cut routes this year, resulting in shortage of cargo space, and there has been a slowdown in goods processing and freeing up empty containers at ports in Europe and North America, the world’s two biggest import markets, while demand during the year-end holiday season is huge.

According to the Ministry of Industry and Trade, China has been getting containers from various countries by paying high prices following a serious shortage earlier this year.

It did so just in time to see exports rise 21 percent year-on-year in November, as manufacturing recovered post-pandemic, creating a general scarcity in the region.

Given the situation, the VMA assured that it would inspect shipping lines and crack down if there are deliberate violations of transparency rules.

The Ministry of Industry and Trade forecasts the shortage of ships and containers to continue until March or even longer if Covid-19 is not controlled.