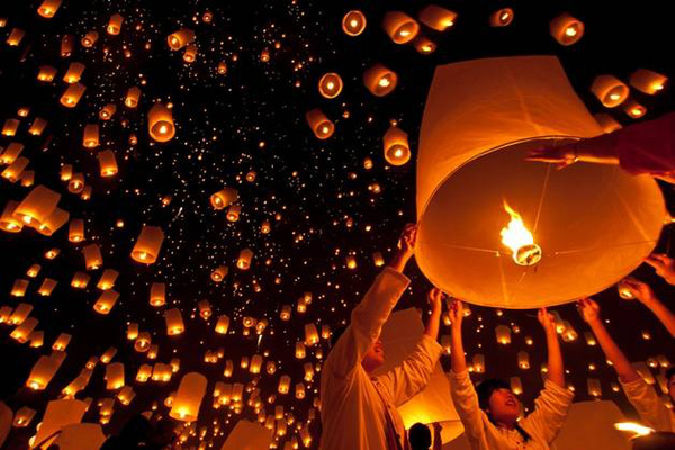 This country is the "Homeland" of mid-Autumn festival with the thrilling volume of Sister Hang and Rabbit Ngoc... In this day, Chinese people often have a customs view of the moon, eat mooncakes, drop lights on the river, hang lanterns and solve puzzles.

The Chinese bakery in China consists of two types of pies and bakeries, but each region has different flavors and designs. Eating cakes and watching the moon is a constant procedure for every Chinese family on the night of the 8th month, as it symbolizes the delegation.

In addition, people are often gathered in rivers to drop lamps and prays to pray about what they desire. In the middle of the autumn night, many young people will pour out the promenade, participate in puzzle solving activities and through which to express love. 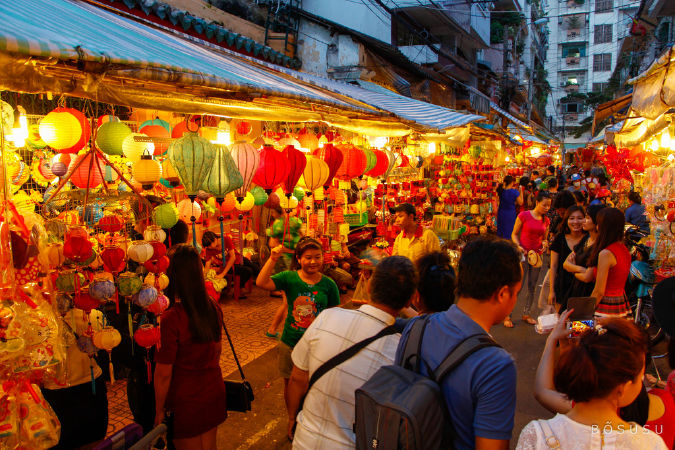 Mid-Autumn Festival in Vietnam is one of the most traditional festivals held by the people. This holiday is often considered "children's Tet", so adults often buy a lot of toys donated to their children, grandchildren such as: masks, lamps, lanterns, drums, lion head, Mr. Dr. Paper... To play on a full moon night.
The traditional Vietnamese moon tray in mid-Autumn Festival consists of 5 fruits symbolizing the marble in the Earth, and pies and sandwiches with different flavors. Pies, cakes are the two signature cakes of mid-Autumn festival in Vietnam, bearing circles or squares symbolizing the heavens or symbols of fullness fullness.

Besides, people also organize unicorn dance (lion dance) in the drum to create a medium autumn atmosphere. The LAN dance group consists of many small children in front of the door of the hamlet, the neighbor to show beautiful dances. Then the landlord rewards the dance for a little bit of money to get lucky. 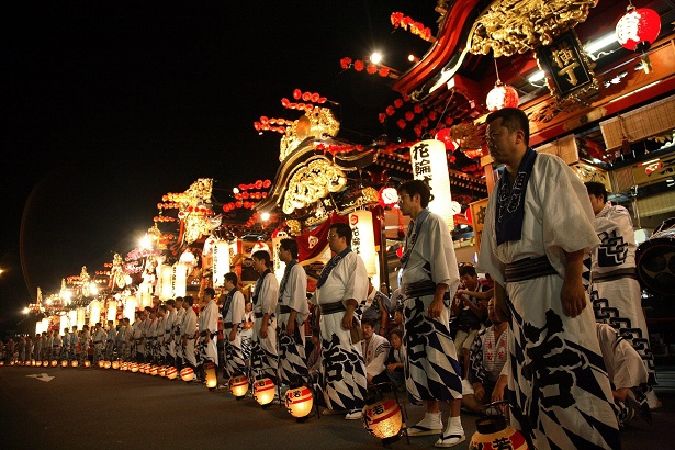 Nowadays, the Japanese are no longer using the lunar calendar, but the Mid-autumn Festival is still held in a roaring and called the Moon Festival (Otsukimi). On the Otsukimi day, the Japanese usually presents the triangular-shaped Tsukimi Dango on a wooden shelf, alongside the Susuki vase then placing the top of the wheel wherever it is possible to see the moon at its best, to just eat the cake, just watching the moon, while the children are given their parents a personal lantern to participate in the lamp procession. The carp lantern in Japan symbolizes courage, especially for boys.

The dumplings are made from rice flour, soft round cakes, with savory, sweet and savoury sauce, often skewered in a bamboo rod and served with green tea. The legend of Mid-Autumn Festival in Japan has only appeared as a Jade Bunny image in behalf of the image of Sister hang, the Pebble and the Cute pearl Rabbit in Vietnam and most other Asian countries. 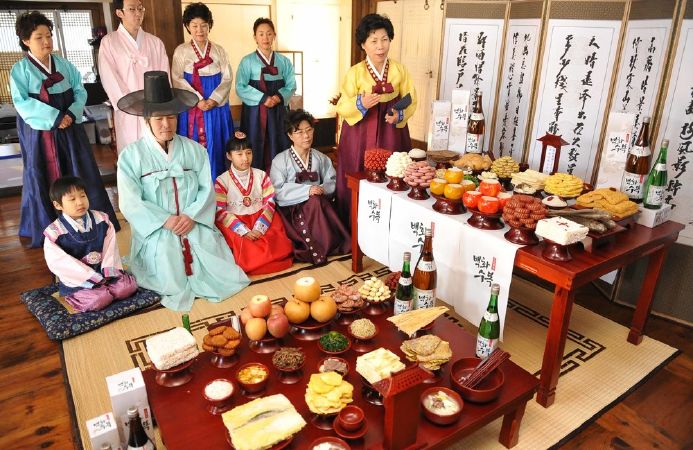 The August 8th holiday in South Korea is named Chuseok. Lasting for 3 days, it is about time for everyone to rest and around the family, although the distant children must also return to reunite with their parents. In Chuseok holidays, Koreans who use new products reap are like meat, fish, vegetables, fruits, rice cakes... To cook dishes into the ancestors, while children wear traditional costumes such as adults, have fun and eat autumn cakes.

The Korean mooncake called Songpyeon, made from rice flour, green beans, sugar and pine leaf, has a half-moon or semicircular shape rather than a circular or square like mooncake in many Asian countries. 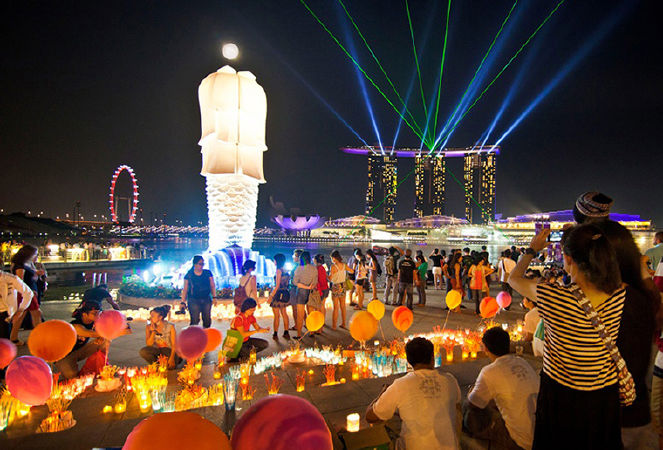 Mid-Autumn Festival in Singapore is an ideal time for everyone to send their wishes, lucky gifts to relatives, friends and business partners. One of the most used gifts is the middle-autumn cake. 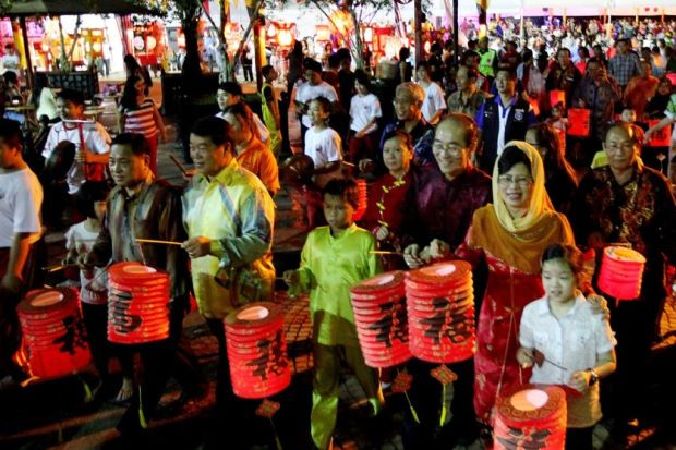 The Malaysians also usually make moon cakes on the 8th month. In addition, they also lighted lanterns in this day. During the festive season, the autumn cake is sold in most stalls. Newspapers and television also have content towards this traditional holiday.

In this day, the People also organise unicorn dance, lion dance and other popular entertainment activities. 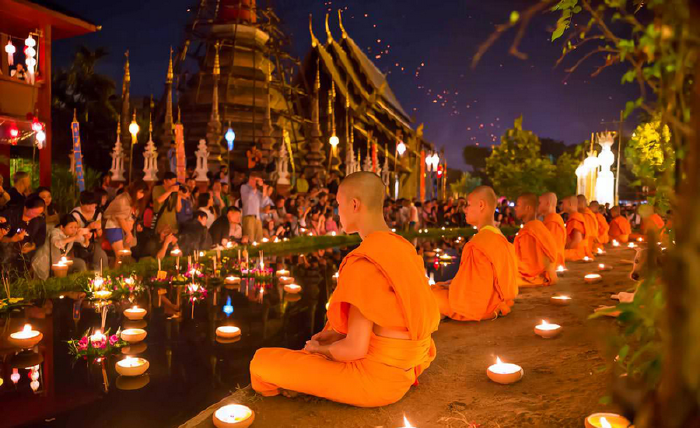 Mid-Autumn Festival in Thailand is called "The Moon Ceremony", held on 15/8 lunar calendar. In the middle night in Thai, all old young girls have to join the celebration of the moon, everyone will sit on the altar of the Bodhisattva and bowl to pray the best things.
Above the altar will showcase peach and autumn cakes. Thais believe that the first thing will help bring Peach to the Moon Palace to have the longevity, and the gods will bless everyone. As a result, the autumn cake in Thailand has a peach-like shape. 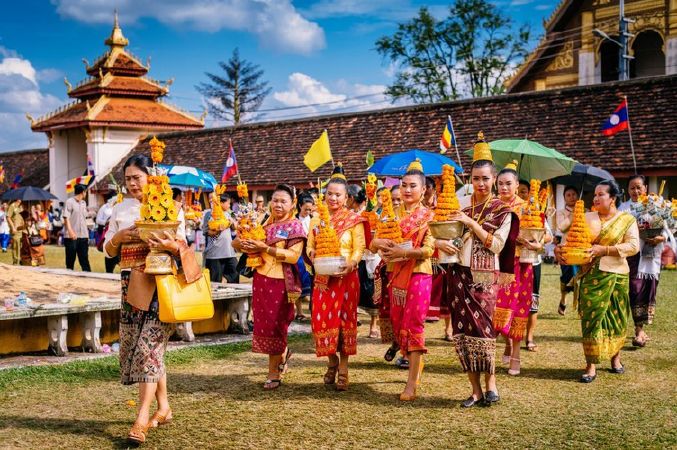 In Cambodia, Mid-Autumn Festival was held on the 10th month of lunar calendar rather than 8 months as other countries. On this occasion, the Cambodian people celebrated Ok Om Bok Festival. This feast includes nuggets, bananas, sugarcane, cassava soup...

In the early morning of the holiday, the people celebrated the Moon Festival, also known as Bai Nguyet weather, in order to present the glass to the moon God. In the evening, together they spread a big shine, to get up there, and to wait for the moon together. Until the moon was elevated through the top of the tree, everyone prays, praying for blessings. Then the elderly will take the clear rice into the mouth of the children, in order to pray for healthy health to them. 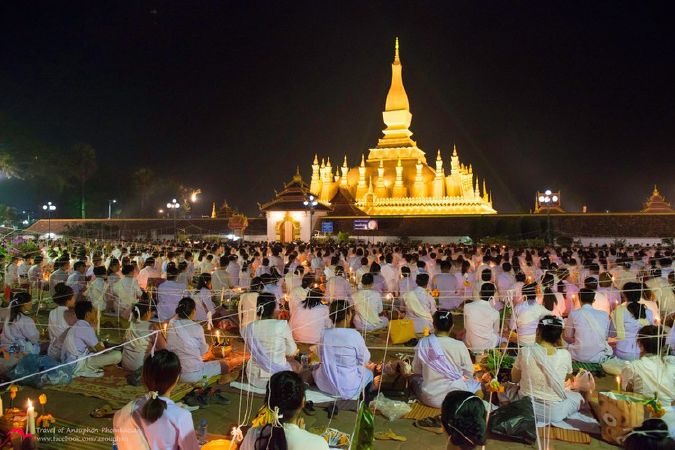 Mid-Autumn Festival in Laos is known as the "Nguyet Phuc Weather" (Blessing Moon Festival). On this day every Lao people, no matter how young and old, are watching Moon, moon. At dusk falls, the boys dancing to singing the night. 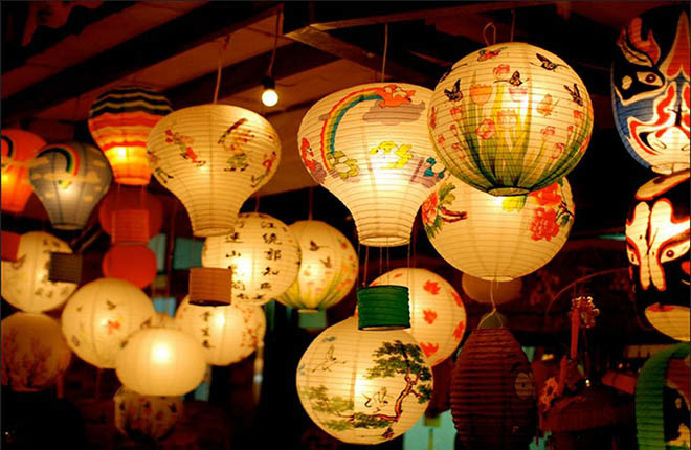 Myanmar is also a country with a median date. The people that call the holidays are full-moon or Quang Minh. During the Mid-Autumn moon, they all lighted lanterns to bring brilliant light to the whole city. On this day, people have fun together, dancing and watching drama, watching the movie to show the joy of the bumper season. 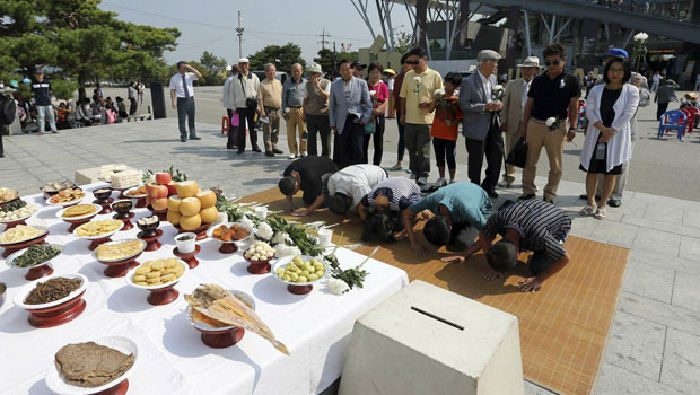 Mid-Autumn Festival in Korea is also known as "the Secretory president" (Autumn Night festival). Korean traditional cakes on this occasion the Sponge cake (muffin). Every house is steamed and donated to each other.

Baked muffin-like wafer-half moon, made of rice flour, inside is bean, jam, Apple,... As it is tempting, the padding has a dilation so the name suggests.

At the beginning of the night, Koreans were watching the moon together. Under the full moon, they played tug, wrestling or performing dance. Young girls will have the most beautiful outfit to join the day.