Home / Best Picks
Top 15 famous MCs of VTV
duonghanhnguyen 4-06-2021, 09:35
For those who follow VTV's programs-TV station Vietnam is certainly too familiar with the famous MC faces, this talent. They are familiar, long-term MC with programs of Vietnam television. There are those who have been sticking from the early days to the present are also those who have retired and made a new role. But the name of the MC, this BTV is still mentioned by many fans because they are associated with favorite programs such as choosing the right price, ringing the golden Bell, who is millionaire,... With a fascinating natural guide, witty humor. This was a monument to the television village of MC. If you are a VTV program fan, join us in reviewing the top MC, the famous BTV 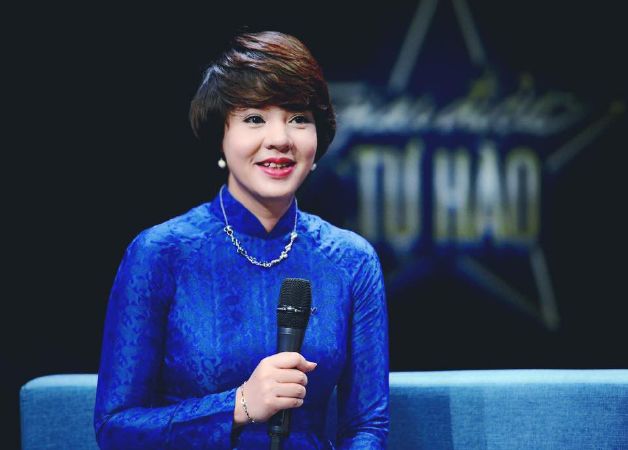 Diem Quynh is the famous MC of Vietnamese television station born in 1972. With the eyes of laughter, gentle paths and attractive audience, journalist Dang Diem Quynh is known to the audience and fans when leading with MC Anh Tuan in the program of the first time music game, MTV program and live TV programs,... In addition to the role of the conductor, the production organization, the audience also saw her appear as the jury of the contest: Vietnam Idol, Rainbow....
After years of VTV, journalist Dang Diem Quynh is currently working with the unit with the journalist Ta Bich Loan on the deputy head of the Youth Committee (VTV6). 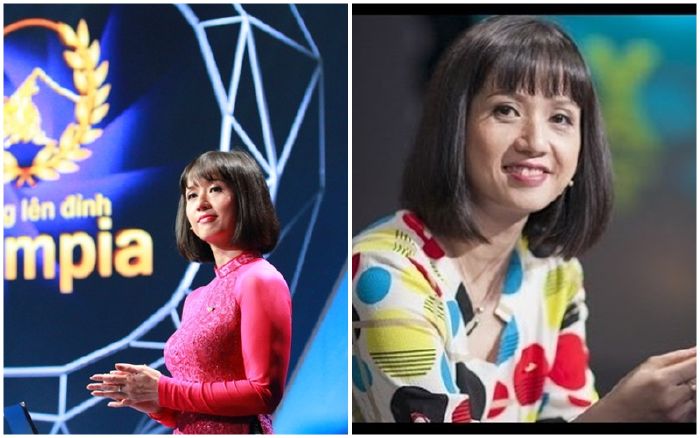 Tung Chi is the female editor, MC, and television director of Vietnam. She is known for her role as a presenter for gameshow students go to Olympia Peak between 2000 – 2004 and return in 2009 until 2016. She is currently the Deputy Entertainment and Economic Information Committee of Vietnam Television.
MC Tung Chi is a familiar face to the whole television audience thanks to its gentle but witty path and young, personality short hair. 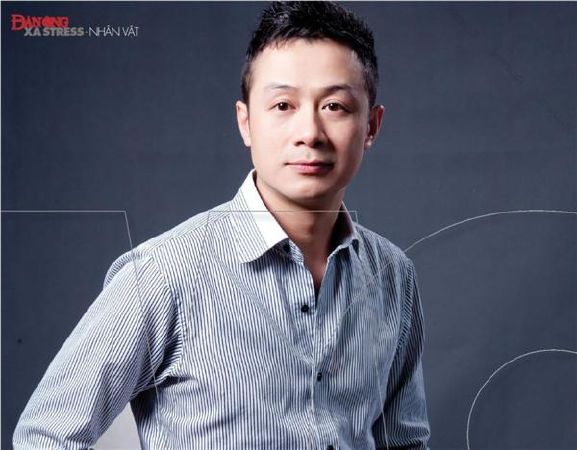 Referring to the first generation of gold VTV3, there must be no audience to forget the face of suicide, "Young Forever" by MC Anh Tuan.
MC Anh Tuan, real name Vu Anh Tuan, was born in 1974, in Hanoi. Mr. Tuan is known as a young and talented MC in the programs of the Vietnam television station. Besides his role as MC, the boy is also known for his "flower training" as a double-match for singers and family actors.
Mr. Tuan is remembered as a MC, a music editor who is a handsome, multi-talented, young and witty guide to many lovers. With a warm, healthy, confident tone, he seriously devoted himself to 18 years with a series of programs he made MC, BTV such as music games, Miss Vietnam for many years, free songs, awards ceremonies, National television singing festival , major celebrations and many other television programs... Currently, Mr. Tuan is not only known as a MC, BTV TV, but also known as the famous international music producer in Vietnam. 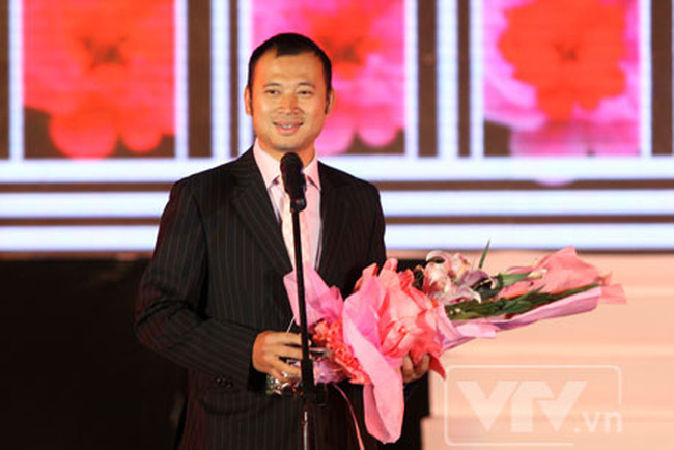 Referring to the rotation of the magic cone is the audience to remember Trinh Long Vu, who made the success of one of the longest life gameshow on the VTV3 wave. In addition journalist born in 1970 is also known as a smart and funny football MC.
At present, journalist Trinh Long Vu has returned to the backstage as a manager of the cable television editorial director, but occasionally the audience still sees him appearing in the sports commentary section on cable TV (VTVcab). 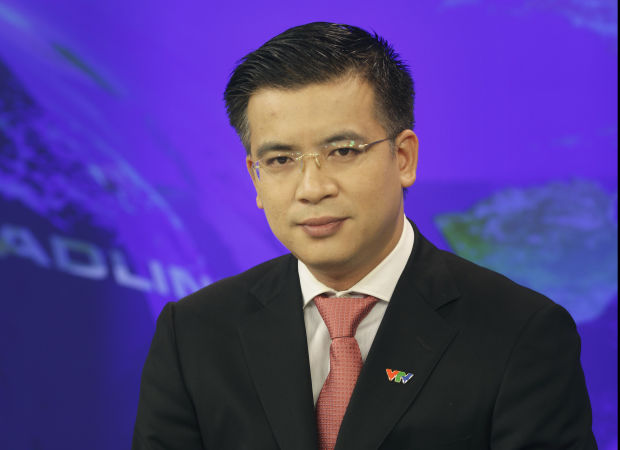 Quang Minh Editor is known as the 19h Daily News wave Manager, the most important newsletter in Vietnam television. BTV Quang Minh is a long-term experience with flexible processing capabilities in the news, program and essays. Although attached to the program is considered hard dry song the audience still see the subtle and profound in the style of the BTV. He is still one of VTV's favourite BTVS.
BTV Quang Minh name was born Le Quang Minh, born in 1976. He is associated with the 19h of VTV from the years 2000 to 2015. Currently, he has also officially moved to the television management role. He is currently the director of the VTV24 family. 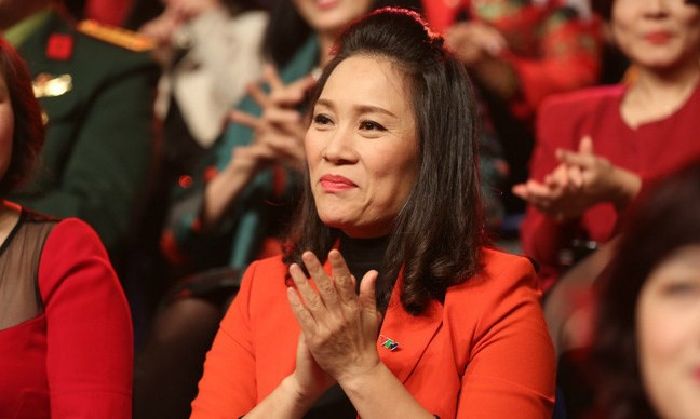 Ta Bich Loan Journalist is the face attached to many famous programs VTV a time such as the summit of Olympia, 7 Rainbow, Contemporary... Versatile intelligence and versatility is a recognizable point in the style of lead, as well as the production of the program of the Taiwan weightlifting journalist.
Dr. Bich Loan newspaper was born in 1968, located in Tho Thai, yen hung commune, yen Tissue district, Ninh Binh has a doctorate in journalism and has been voted one of the 50 most influential women in Vietnam. After his retirement from 2017, Ta Bich Loan became the head of the production of entertainment programs (VTV3). Currently, Ta Bich Loan is holding the director of Editorial board VTV3, Vietnam television. Referring to Lai van Sam journalist, VTV's audience for nearly 20 years has always been associated with programs such as SV 96, league games, combat, we are the soldiers led by him. Especially, the Ai program is a millionaire.
The journalist who is born in Panax ginseng on 10 June 1957 is an artist of the people, journalist, television presenter and editor of the Vietnam television station. He was one of the proposals to include television games on the VTV3 channel.
The journalist of Van ginseng is considered a famous monument in MC VTV in particular and Vietnam in general. In 2017, the journalist returned to the retirement of Van Ginseng, leaving the director of the Entertainment Programme (VTV3). Despite this, the journalist still appears leading 1 number of programs "Baby Sun", "Happy Memories ", "What are the opportunities for? "... 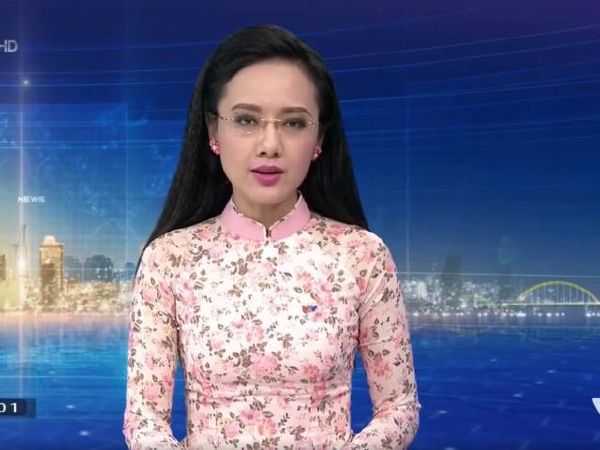 Hoai ANH 1980 is the host and editor of Vietnam television station and the Vietnam Television Center in Ho Chi Minh City. With its distinctive appearance and male vocal qualities, she was one of the most beloved of the BTVS. In vote "Favorite TV Presenter" (in 2008) held by Vietnam Television magazine, Hoai Anh was the winner of the second most votes, she was only placed after the editor Quang Minh and co-ranked with the editor van Anh. 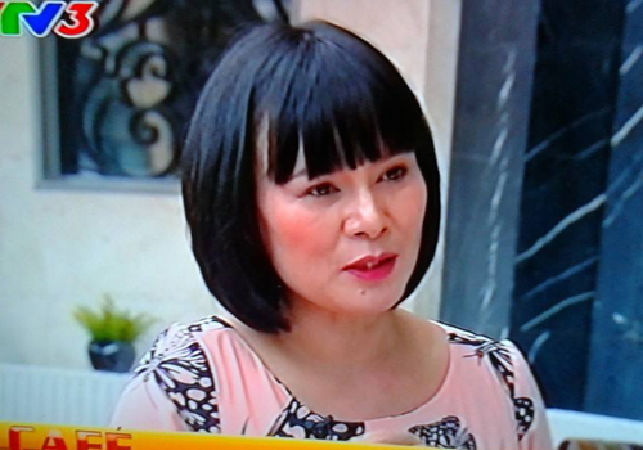 Journalist Bui Thu Thuy is a face that leads the program familiar to the viewers who love the VTV3 channel. BTV Thu Thuy became familiar with many TV audiences through the Sunday Home program. She then went on to take part in charge of directing the production of many well-known programs such as: Choose the right price, secret doorway, Magic Hat, the Olympia line up, ring the Golden Bell... 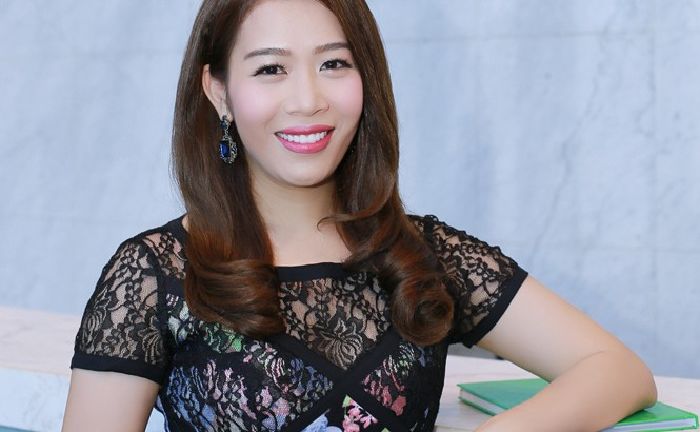 BTV Diep Chi was acquaint the audience with the gold ring program, Diep Chi was then loved by many audiences as the director of the 7th wish. Diep was born in 1986, Diep Chi born and grew up in Vinh City, Nghe An. Parents of Chi are all original artisans.
With the television since MC for the gold ring program to be played on the channel VTV3-Radio, Diep Chi was then loved by many viewers as directed by the 7th wish. As well as the MC collaboration for the Golden Bell, later, Diep Chi became the "Person of VTV3" and is now an editor (BTV). 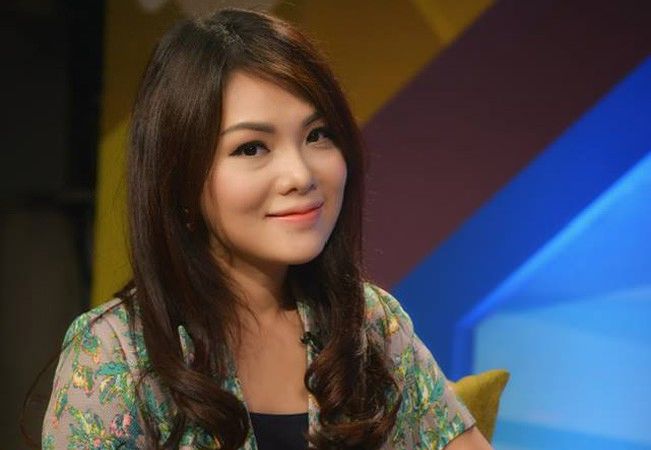 The name of MC Bach Duong is associated with a time-broadcast cultural journey on VTV3. She is also loved by children through the Fairy Garden program.
With the guidance of the witty, intelligent, humorous, Bach Duong MC (full name is do Thi Bach Duong) has captured many public affection. After six years of sticking to cultural journey, by year 2007, Birch also parted VTV3 to move to VTV6.
Because the main work is editing and organizing the production of VTV6 programs is very important, she focuses on the part of the work and very rarely appears on television. 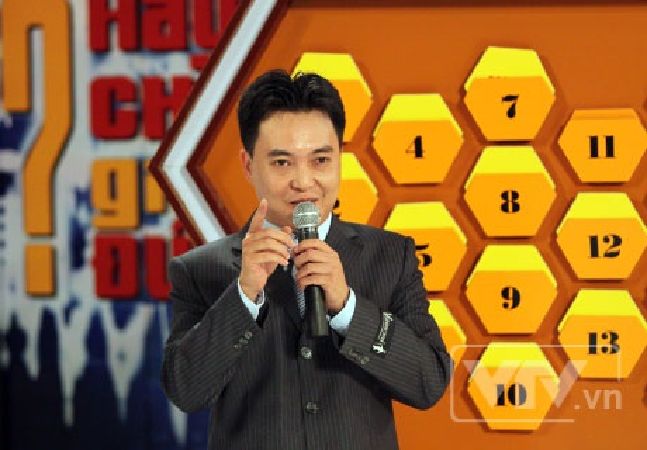 Luu Minh Vu was born in 1970. He is the son of the stage writer, poet Luu Quang vu and female artist "To uyen ". Minh Vu was first widely known by the audience after the seven-colour Rainbow television program. He also led gameshow to reach the Olympia Summit in 2000, 2002 and 2003. From 2005 to 2012, he followed the role of MC from Lai Van Sam in the program of choosing the right price. Currently, Luu Minh Vu has switched to a television management role. He is currently deputy head of the game room and meeting 1, channel VTV3 of Vietnam television. 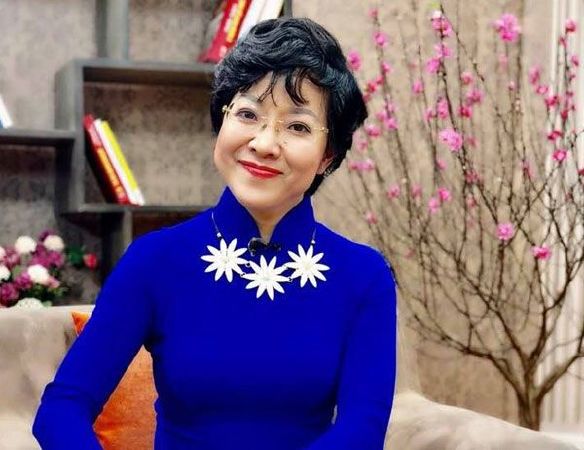 MC Thao Van full name is Nguyen Thi Thao born in 1970 in Lang Son, is a civil servant at the Hanoi National University, but Thao van is famous for doing MC of many programs.
Well-known from the role that host last week and other programs such as Laughter Gala, meet last year, my program and Ours, Rubic online program, helpful program, late night, more gold, understanding the heart. 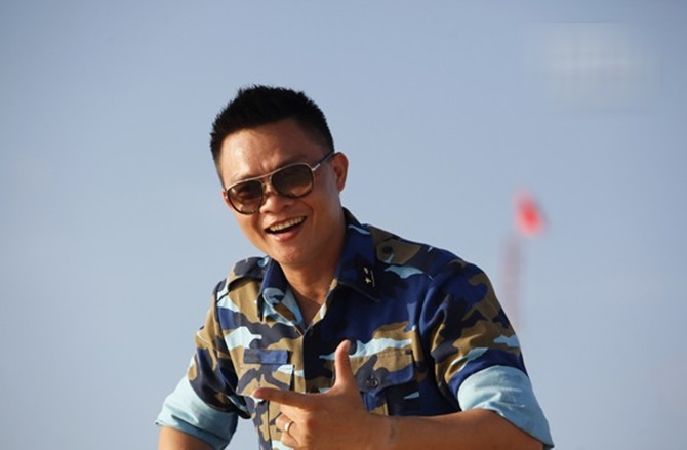 MC Tran Quang Minh was born on 18-6-1975 in Ha Noi. In 2002, he started VTV3 and made an impression with the audience through a series of games show as the children were always right, faced, we were soldiers. Currently, BTV Quang Minh is currently the deputy Room interactive content of the Youth committee of VTV6. 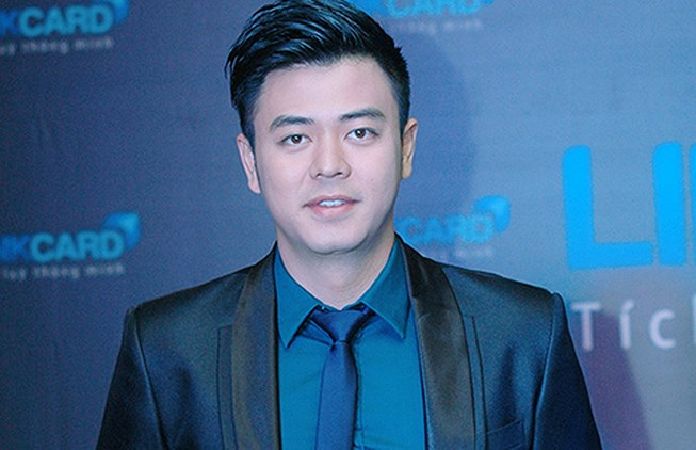 MC Tuan Tu is named Phan Tuan Tu born in 1984. Five years ago, Tuan Tu was a very beloved MC at VTV with the show "The Magic Cone". His acting career as well as the kite encountered the wind with consecutive roles in many television series.
Until recently returning to VTV and the small screen, Tuan Tu made many people do not recognize. Because of the strange appearance but with the unique role of cute in going home, he is still loved by the audience.