Home / Best Picks
Top 10 most beautiful waterfalls in the world
hanguyen0409 4-06-2021, 00:07
The waterfall is one of the natural ones that the Blessed man has been. No matter where you travel, standing in front of a high waterfall with a white bubble cleared in the majestic nature will surely make your soul shake. Following topshare please share with you the most beautiful waterfalls in the world. 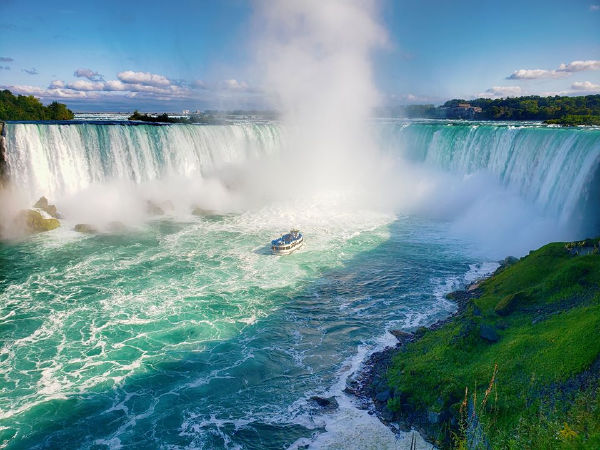 Niagara Falls is one of the most famous waterfalls in the world. It comprises three waterfalls, the U.S. falls, Bridal Veil and Horseshoe falls across the international boundary between the Canadian province of Ontario and the U.S. state of New York. It forms the southernmost of Niagara Gorge. Horseshoe Falls are located on the Canadian side while the rest of Niagara is located in New York. With over 14 million visitors each year, this is one of the most popular tourist attractions in the world. You can visit this place on a boat excursion and admire the fascinating tourist attractions around the falls. 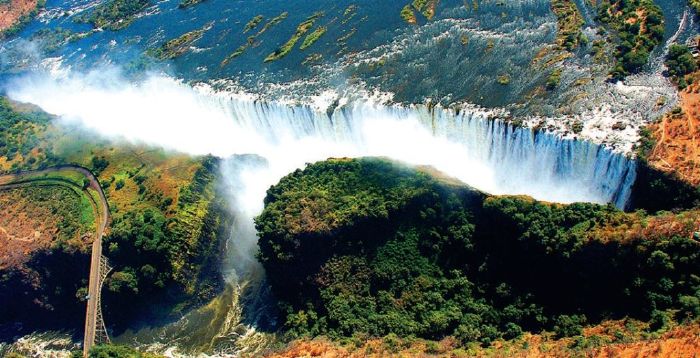 Victoria is one of the most famous and majestic waterfalls in the world. The waterfall is 107 m tall and 1.8 km wide, down from the giant Zamberi River. It is also part of the border divided by Zimbabwe and Zambia. Here, the Devil's Pool, which is formed on the edge of the waterfall, is open in the dry season when the water is not flowing to welcome the adventurous tourists. 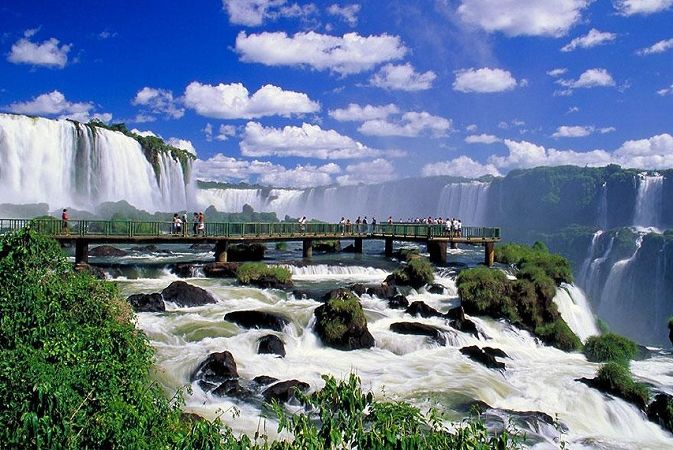 Located along the Brazilian and Argentia border, Iguazu is the largest waterfall in the world. The waterfall has an elevation of 82 m, divided into nearly 300 waterfalls stretching 3 kilometres, creating a majestic sight "a no-two". According to legend, in Wrath, a god separated the Iguazu River as a duo to separate the love of a man with another deity. 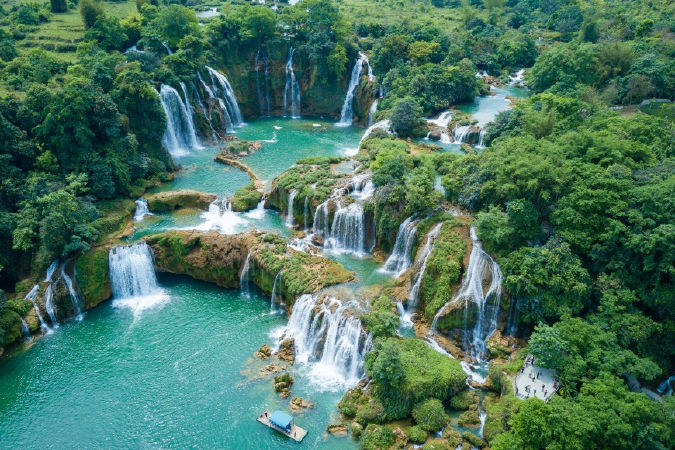 Ban Gioc Waterfall is a waterfall located between Vietnam and China's borders, which is the world's fourth largest country frontier, after Niagara, Victoria and Iguazu. The waterfall flows down from a height of 30 meters, divided into three waterfalls thanks to boulders and greenery. In the rainy season, from a distance you can easily hear the rumbling falls, beating into the cliffs. 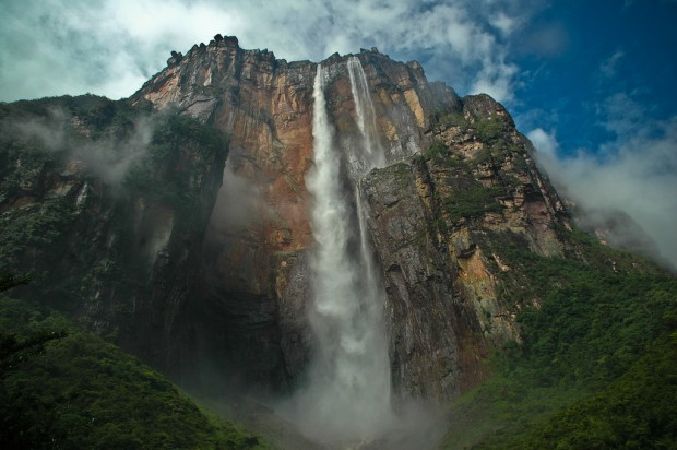 At a height of 1070m, Angel is the highest waterfall in the world, and because of this elevation, water droplets have evaporated before "chance" touches the bottom of the lake below.

When you stand from the bottom looking up, you will not know where the waterfalls are flowing down. Unlike the other waterfalls, Angel's water does not come from Tan or river Lake in the upstream that it comes from the rainfall pouring straight down from the tropical giant clouds. 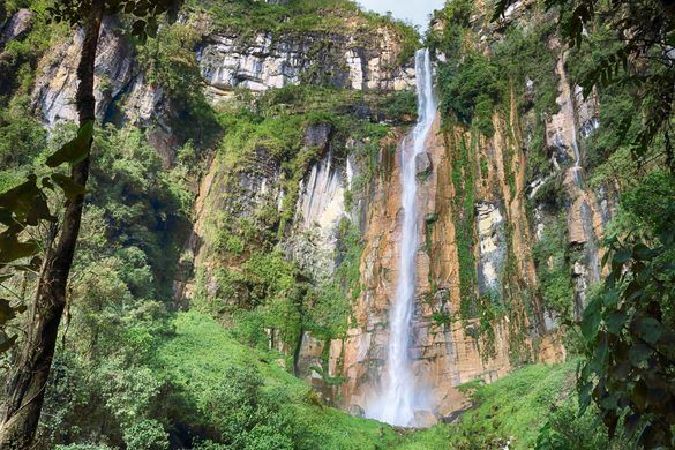 Located north of Peru, Yumbilla is the 5th highest waterfall in the world with an elevation of 896 m. The whole area is a magical natural masterpiece with magnificent mountains, pristine forests and diverse ecosystems. Located just off the charming town of Cuispes, Yumbilla Falls attracts a lot of tourists to visit and resort to. 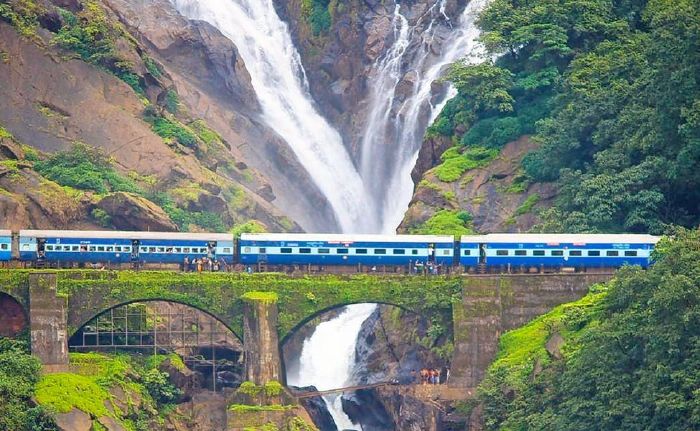 The waterfall designation means "Sea of milk". The majestic waterfall is located in Mandovi River, southern India. The highest waterfall of India with a height of 309 m, is also an attractive tourist attraction with any visitors. A trail is also built around the area so that you can fully visit the waterfalls from a variety of angles. The water of the waterfall is dark blue with a total of 16 large lakes that form a vast lagoon and thousands of night waterfalls "Roar". The Plitvice falls are located in the Plitvice National Park in southwestern Croatia. The water at the lake is also blue, green because of the diversity of minerals and microorganisms living at the foot of Dinaric Mountain running deep down the bottom of the lake. Located in the heart of the world-famous Yosemite National Park in California, Yosemite Falls are prominent among many natural tourist attractions. Yosemite is the highest waterfall with an elevation of 739 m, pouring down a giant sequoia tree forest that forms an interesting backdrop to tourists. In addition, the mighty Granite mountains and many of the top-class resorts are also popular attractions here. 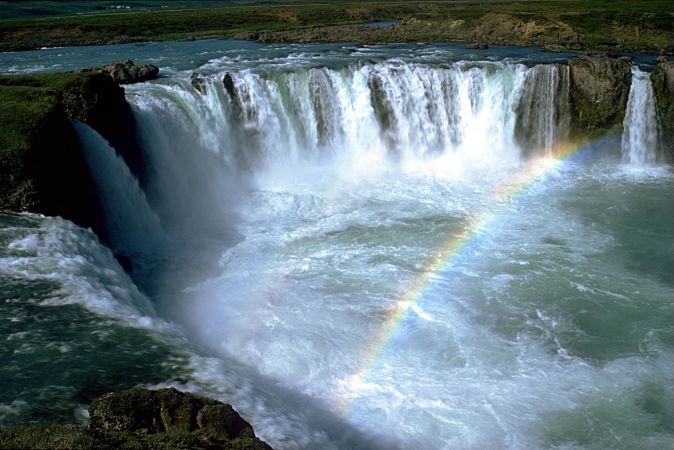 Godafoss Falls is the most popular tourist attraction in northern Iceland. The waterfall is 12 m tall and 30 metres wide, but quite modest but the waterfall when saturated with beautiful natural surroundings to amaze. The waterfall is the place where Christianity is adopted to become the official religion of Iceland in 1000. That's why it's also called "Waterfall of Gods."