While running a startup company these days is pretty straightforward and relatively smooth, especially when seeking financial support, the reality is that nothing ever comes easy.

For almost any kind of venture, the growth potential is enormous. As a result, startups must rethink their business and innovation strategies. The only good news is — the sky’s the limit.

In this Vietnam Innovators episode, Hao Tran spoke with Tran Dang Hoa, COO of FPT Software, about incubators and accelerators as well as how they’re harnessing the potential within FPT Software. Hoa also talked about FPT Software’s Incubation initiative.

FPT Software is the leading Vietnam-based IT company in South East Asia, focusing on digital transformation. They are headquartered in Hanoi and have offices in the US, Europe, Japan, Singapore, Australia, and more.

Working at FPT Software for 18 years, Hoa’s held several positions, including leading the Japan branch. But to him, even if he’d seen almost everything in the company, he’s aware that “there’s always [people] better than me, and I acknowledge that as a good thing.”

Hoa’s strength lies in his ability to understand and communicate in business and tech languages. Thus, he’s able to grasp and comprehend the two ends.

At FPT Software, Hoa defined the terms: “Accelerators mean the product is already there, it’s finished and ready to scale. So, when our team or other outsiders come in, we can support them using our resources like finance or infrastructure. The most important part is you already have something that we can accelerate.”

As for incubation, the FPT Software COO said, “you just need to have an idea, and together we will build and create something.”

FPT Software can both be an accelerator to scale and an incubator to develop.

“There’s not much difference between the two concepts,” Hoa pointed out. “When you look at the final step, which is to be successful, there’s just one or two steps to take to reach the goal.” 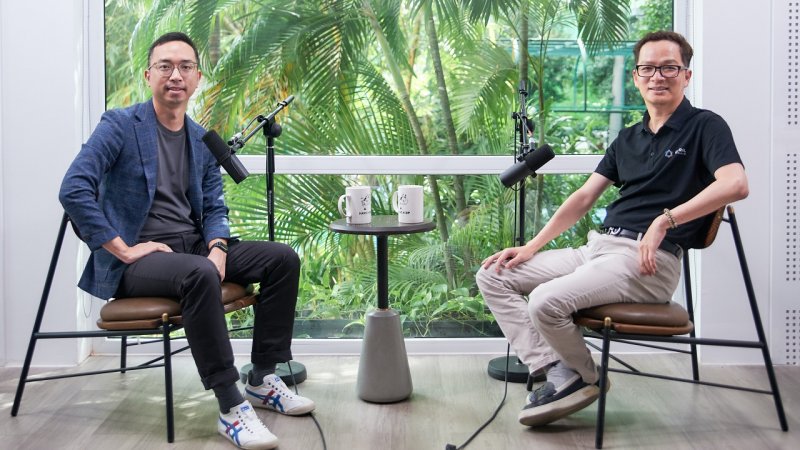 Entrepreneurship is a common term used almost by every individual. Intrapreneurship, on the other hand, may not be familiar to most. While entrepreneurs run their own companies, intrapreneurs are responsible for innovation within the firms where they work full-time.

FPT Software is a massive name that pays close attention to intrapreneurs. For the startup founders who are interested in working with FPT Software, Hoa said everyone could easily get in touch with them. “It’s pretty easy to get in, the challenge is how to stay and continue to grow.”

When asked how they choose which ideas to invest in, the COO said, “If I see the potential that a person is good at something, I’m convinced they’ll produce something good as well.”

The second is that there should be a good product. “This is a common scenario, they have something good, and they see us, and it starts there.” Lastly, it should be trendy, such as NFTs, metaverse, or integrated circuits.

Hoa explained that no one could guarantee success. Everything must involve hard work and dedication. “You cannot be successful all the time,” he said. “In the past, we may have failed to meet our objective twice or thrice, but we were able to work it out. With FPT Software Incubation, we can only increase the chance of success but cannot guarantee zero failure.”

Talking about success, Hoa’s dream for FPT Software is to be able to build more significant projects than what’s already existed.

“With FPT Software Incubation, our goal is to help Vietnamese people do something greater,” he shared. “We want to make a name for Vietnam that goes beyond food. There’s so much more we can offer, and we want to be able to support our people in realizing that.”

Watch the full episode below.