Vietnam’s growth domestic product (GDP) grew 13.67% in the July-September period this year compared to the same quarter in 2021, the General Statistics Office reported on Thursday.

As the exports to the US surged and continued solid performance by manufacturing, Q3 of 2022 recorded the highest rate over the same period since 2011.

Moreover, the agriculture-forestry-fishery sector expanded by 2.99%, contributing 4.04% point to the overall growth of the economy.

GSO stated that Vietnam’s exports jumped to 17.3% this quarter from a year earlier to $282.52 billion. 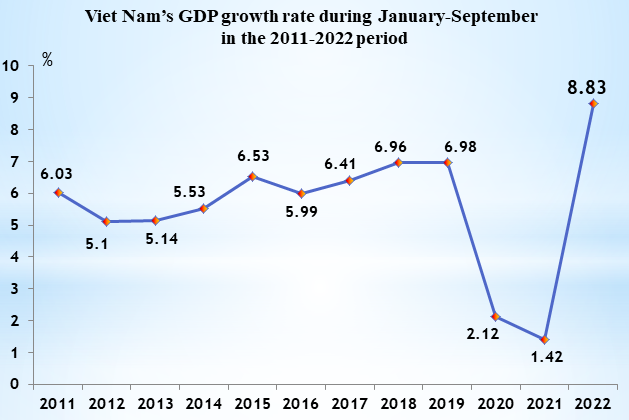 Because of the impact of the global pandemic, Vietnam’s GDP decreased by more than 6% in Q3 of 2021. Thanks to the boost from the manufacturing sector, the country was able to recover faster than expected.

Officials from the GSO said that business activities in the third quarter saw strong growth “especially compared with the same period last year when several parts of the country were under strict lockdown due to the pandemic.”

Earlier this week, the World Bank released a forecast saying Vietnam is expected to grow by 7.2% in 2022.