On August 28, The Macallan unveiled The Reach, a unique, 81-year-old single malt whisky for eternity, reflecting an extraordinary moment in time that also exemplifies the enduring spirit that has been at the heart of this brand for almost 200 years.

One of the unwritten rules in the hospitality industry in Vietnam is that one should always accept any invitation to an event from The Macallan.

This brand is among the world’s top leading single malt whisky by volume. The creation of The Macallan draws on the vital contributing influences of Spain, North America, and Scotland — and of their respective natural raw materials, combined with traditional methods and craftsmanship. 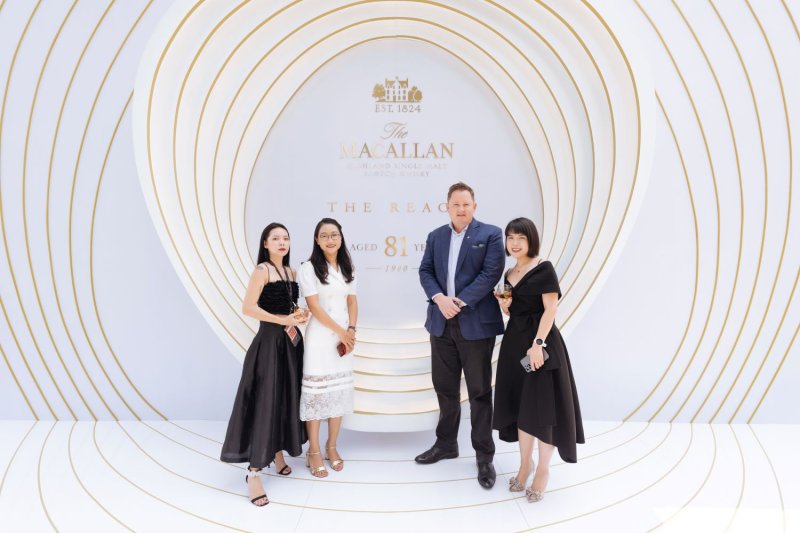 Whisky connoisseurs love the storied history and provenance of The Macallan, tracing back many centuries to when an Irish monk named “Ellan” was rumored to have wandered through the “magh,” fertile barley growing area of the Scottish Highlands, as a Gaelic representation of “MaghEllen” emerged. Then barley farmer Alexander Reid officially established The Macallan in 1824 as one of the first ever-Scottish distilleries to be legally licensed.

The Macallan is, of course, classed as a single malt whisky meaning the whisky contained in any of the bottles released under its banner must have been produced only at their distillery.

The Macallan uses the highest quality spring water from the River Spey beneath its estate and distills its whisky using smaller, more expensive stills that drive a stronger flavor concentration. They are also famed for using only 16% of the spirit-collected form of these stills to fill their casks, further enhancing overall quality.

The advertising and promotion of this brand are consistently world-class as their whiskies are always beautifully presented in premium packaging and are prominently displayed in all respectable airport duty-free concessions worldwide.

Vietcetera has always enjoyed The Macallan’s contribution to the James Bond franchises, especially in the movie Skyfall when evil villain Raoul Silva (played by Javier Bardem) reveals that the 50-year-old Macallan is indeed the favorite tipple of James Bond.

In 2018, The Macallan opened a new chapter in its history with the launch of its award-winning Speyside distillery. Designed by internationally acclaimed architects to promote sustainability, the building takes inspiration from the surrounding ancient Scottish hills. It stands nearby Easter Elchies House, the Highland Manor representing The Macallan’s spiritual home and the focal point of all of its branding.

One of the largest international spirits companies in the world, The Edrington Group, is the owner of The Macallan and other successful global brands like Highland Park Single Malt Whisky, Brugal 1888 Rum, and No.3 London Dry Gin.

The Edrington Group is very active in Vietnam, running a highly dynamic local team based around Brand Ambassador Denish, Katie, who is the Marketing Guru, with Tina managing sales in the North and Hien in the South. They have also partnered with the highly regarded Alchemy Asia to manage their distribution requirements in Vietnam. 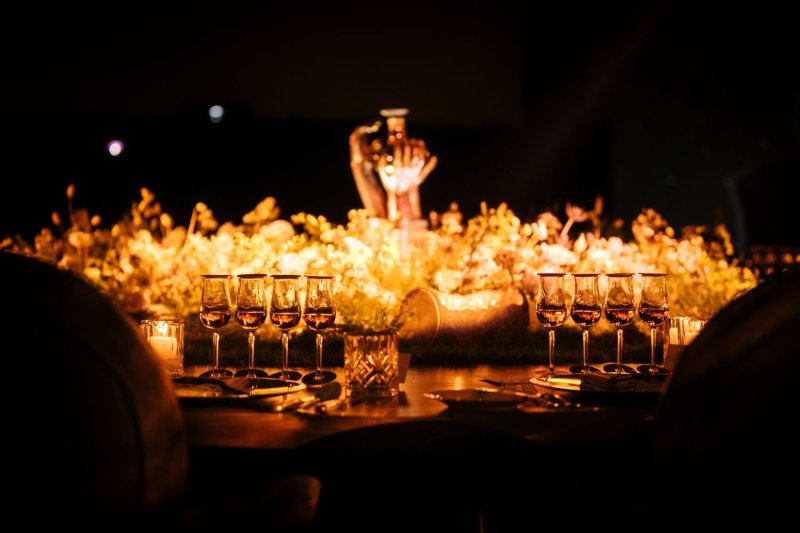 A grand table setup for the launch of The Reach, 81-Year-Old Single Malt Whisky.

Now circling back to this fantastic event, I was required to report to an “undisclosed location” in District 7 at 10:30 on a Sunday morning. They had set up a beautiful deck on the grassy banks of the lake around the Chloe Gallery to welcome their guests with a highball cocktail before guiding us through a velvet curtain that concealed a giant dome enclosure.

I instantly felt as if I had mistakenly stepped onto the set of a Game of Thrones episode, perhaps that of the Red Wedding scene. However, I was instantly reassured by the unexpected presence of Heath Gordon, the executive chef of the Park Hyatt Saigon. He was there to curate a delicious menu in keeping with the splendor of the event.

The main event was going to revolve around the presence of a stunning bottle of The Reach in the middle of a large circular table around which 20 lucky guests were seated. The bottle was housed and presented within a sculpture, a beautiful depiction of three hands reaching skyward created by famous sculptor Saskia Robinson to pay homage to the many hands at the distillery who had worked together over the years to produce this whisky. The sculpture was cast in bronze, and the glimmer of the metal under the spotlights contrasted beautifully with the darker surroundings throughout the tented arena.

An incredibly rare single malt at 81 years old, The Reach is the oldest whisky ever released by The Macallan, crafted from a single, sherry seasoned oak cask. The dark, precious whisky was encased in an exquisite decanter created from mouth-blown, hot glass and then cradled on the bronze sculpture of the three hands. Only 288 decanters (bottles) of this whisky will ever be released for sale worldwide and only through highly exclusive Macallan accredited boutiques. Just one bottle of this whisky was made available to be sold in Vietnam and was rumored to have changed hands with one lucky collector for as much as VND4.5 billion ($191,000). 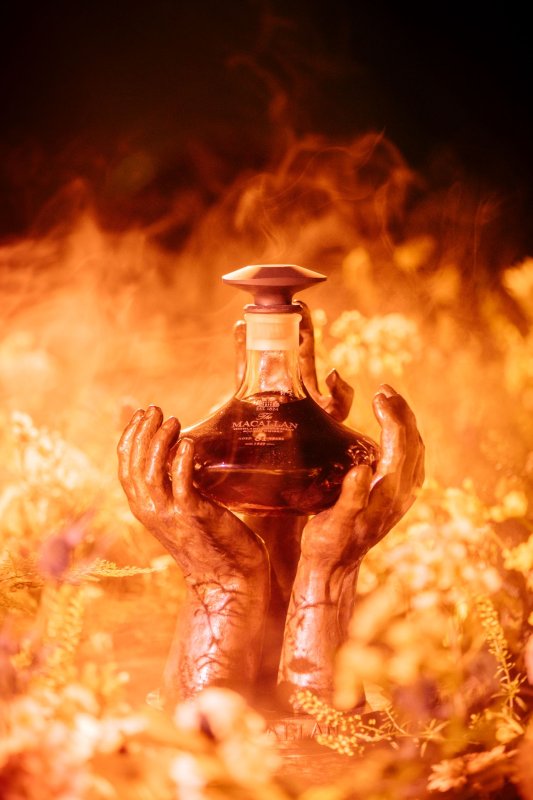 At 81 years old, the Reach is one of the world’s oldest and most valuable whiskies.

The guests in attendance seemed to have been hand-picked for their love and appreciation of amazing whisky. We all listened attentively to a short message from Kirsteen Campbell, the current Master Whisky Maker at The Macallan who had made the key decisions about choosing the best time to release the whisky and had also carefully selected the 1940 cask used to create the whisky.

Kirsteen shared with us via recorded video link, “It is an honor to introduce The Reach. Created during a turbulent time in the world, this extraordinary expression showcases The Macallan’s history, ingenuity, and unmistakable strength of character. The creation of many hands, The Reach has been a truly collaborative effort and is a tribute to the people who made this precious whisky and their enduring spirit.”

Regarding its flavor profile, Kirsteen then discussed “its deep auburn hue and astonishing depth with notes of dark chocolate, sweet cinnamon, and aromatic peat, leading on to treacle toffee, crystallized ginger, and charred pineapple, before giving way to an intensely rich, sweet and smoky finish.” 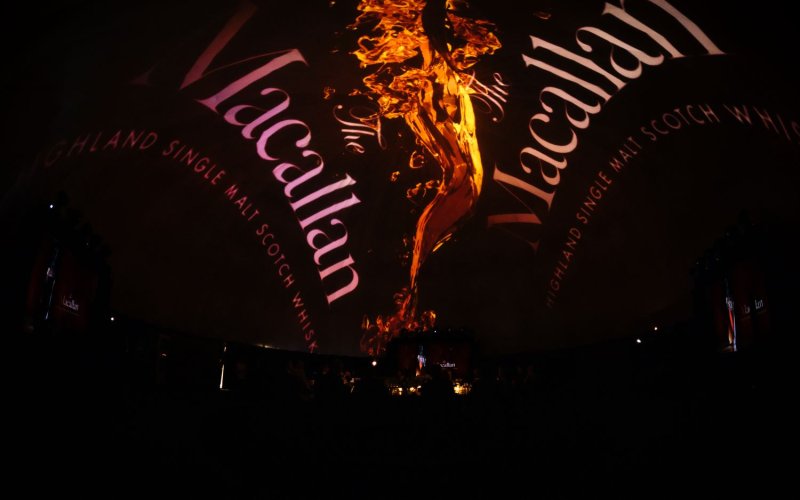 The stunning visual graphics projected onto the ceiling.

As the event unfolded, we understood why we had been invited to such a large, tented arena as stunning imagery was projected up to the high ceiling in keeping with a stirring musical soundtrack. Although we understandably could not taste The Reach, a sumptuous flight of whiskies was laid on by Brand Ambassador Denish, who had worked carefully alongside Chef Heath to curate a lunch menu to pair perfectly with the intricacies of the whiskies.

Denish prepared a flight of five of their most famous bottlings, including the Rare Cask, their No.6 series, and even a pouring of their stunning “M” expression from a spectacular Lalique crystal decanter. However, the whisky I enjoyed the most was their Reflexion, whose floral and vanilla notes paired perfectly with Heath’s delicious butternut squash pasta dish.

Of course, it’s remarkable to sample such world-class whiskies and cuisine, but the fact remains that the key to any truly memorable experience will always be the people at the heart of it all.

I’ll remember most the warmth of the welcome I received from Denish, Katie, Tina, and Hien and how actively they socialized and engaged with all their guests. I was fortunate to have been seated alongside the debonair Nguyen Khac Trung from The Meaningful Agency, and I asked him to help me summarize this incomparable afternoon. 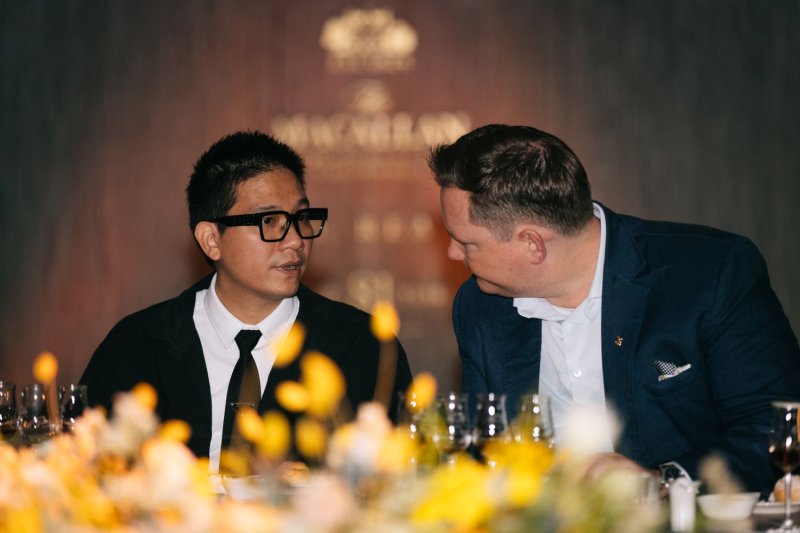 Nguyen Khac Trung from The Meaningful Agency shares his impressions of the lunch with Chris Thompson.

Trung commented, “The whole experience was really professionally planned, and I loved the stunning setting of the arena and the passion of Denish, their Brand Ambassador, who so eloquently discussed the history, legend, and heritage of The Macallan.

The whiskies were top-notch, Heath’s food was delicious, and I enjoyed every course, especially the Atlantic toothfish matched with The Macallan No. 6. The actual unveiling moment of The Reach was mind-blowing, it appealed to all of my senses, and I could feel my heart pounding.”