Hanoi’s “train street” is inarguably one of the capital city’s most well-loved and Instagram-famous destinations. From foreign tourists eager to get that jump shot in front of a speeding train to locals who love a nice glass of cafe sua da with an extraordinary view, the unique vibe of the railway track attracts a curious crowd.

But the 300-meter-long railway track that runs alongside Dien Bien Phu and Phung Hung streets has also been considered a danger-prone area.

Authorities on Thursday placed barriers on the railway after safety violations were raised. The makeshift cafes, restaurants, shops, and houses that border the tracks have violated safety regulations and pose risks, Hoan Kiem district authorities told local media. Those without business licenses have already been told to suspend operations immediately since Wednesday night.

Police officers can be seen standing in front of the barricades to make sure no one enters the area.

It wasn’t immediately clear how long the area would be closed, but officials said shops in the area must close in the next three days. 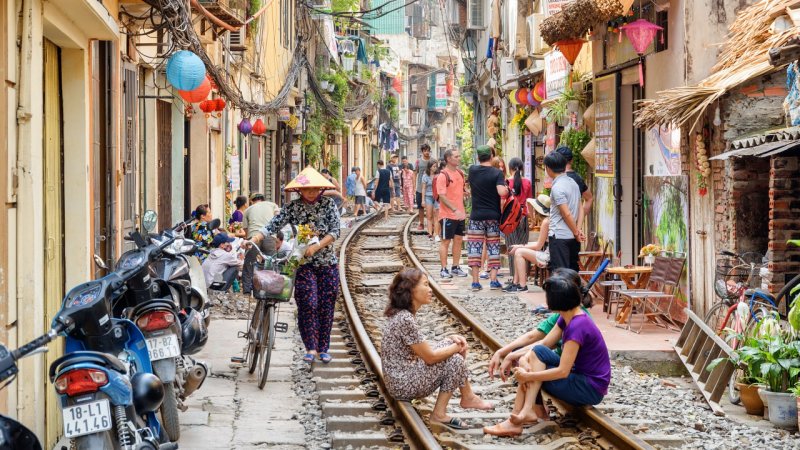 But in October 2019, a train leaving the Hanoi train station was forced to make an emergency stop while passing the narrow tracks in Hoan Kiem District after a foreigner stood too close to the rail while taking pictures, VnExpress reported then. The incident forced authorities to shut the train street in October 2019.

The driver said it was the third time he had stopped on the train street section because tourists carelessly took selfies. 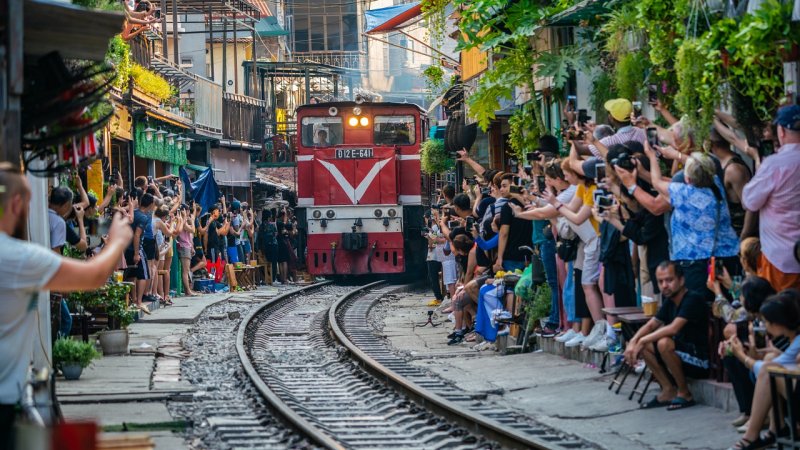 A thriving tourist and business spot

Built by the French in the 20th century, on single-track railway runs through Hanoi’s Old Quarter. The houses that are only a few centimeters from the tracks were built afterward to house railway workers.

Today, it serves as a spot for selfies featuring the iconic trains and residential homes turned into quaint cafes, restaurants, and souvenir shops.

As the number of shops increased — with the majority of them setting up small tables and stools that allow tourists unobstructed views of the railway tracks — the crowd has also grown larger.

Hanoi is short on sightseeing resources compared with Danang, a tourist-orientated city in central Vietnam, and the southern commercial hub of Ho Chi Minh City, an article from Financial Times reads. The “train street” offers the capital city and its residents opportunities to grow business and attract tourists.

After Vietnam reopened its borders in March and scrapped all COVID-19 entry restrictions, inbound tourism has seen a massive rebound. The country has so far welcomed 1.4 million tourists as of August, a 1,272% increase from 2021. Travelers from Asia topped foreign arrivals, while those from Europe and America came in second and third, respectively.

But while authorities acknowledge that the growing prominence of Hanoi’s “train street” is an important factor in Vietnam’s tourism recovery from COVID-19, the safety of both locals and visitors remains a top priority.

District authorities said its working with relevant institutions to develop a sustainable and safe tourism plan for the area. Further safety regulations will be implemented for businesses and households, as well as strategic train schedules.