The word veganism was coined in 1944 as an extreme form of vegetarianism. And while many people have declared themselves vegan for decades (even centuries), the concept of meat avoidance further grew in popularity during the pandemic. With everyone becoming more aware of their health, the importance of vegetables and greens has been given renewed attention.

To vegans, switching their eating habits to an all-vegetable diet isn’t just about taking care of the body but nourishing the soul. For religion-related veganism, a meatless lifestyle means freedom from earthly sins.

Though I was not born vegan or vegetarian, I have always found the lifestyle meaningful — challenging but meaningful. Out of curiosity, I went to a vegan restaurant in Hanoi for the first time in my 21-year existence. Thanks to the motivation of a vegan friend, I had a taste of the vegan lifestyle in a buffet restaurant (who says only Korean BBQ and hotpots can offer buffet feasts?). To be honest, it was like stepping into a new, unfamiliar world. That day, I finished one whole meal — or two — without the heavy stomach I usually get when eating at fast-food restaurants.

I started searching for vegan restaurants in the city, trying them one by one as I began understanding the essence of this lifestyle.

Here are five vegan buffet restaurants in Hanoi you definitely should check out. 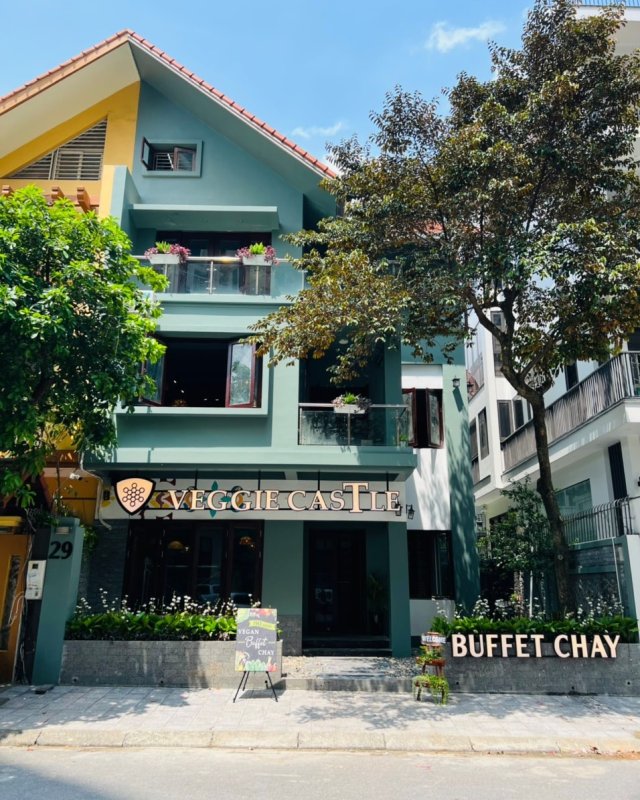 If I were to describe how famous Veggie Castle is, it would be the restaurant everyone would first think of when you tell them you’ve switched to a vegan diet. The place was opened in 2018 to popularize veganism for everyone. And it successfully did. Within the last four years, Veggie Castle opened three other locations across Hanoi in three districts: Ba Dinh, Tay Ho, and Cau Giay.

Its vegan dishes are inspired by traditional Vietnamese flavors and famous dishes from around the world. At Veggie Castle, there are new buffet selections every day that are posted on the Facebook page. The buffet tables are on the second floor, while the first and third floors are used for seating. During my visit to Ngoc Khanh location, I noticed that the buffet section was relatively small, so there could be around 10-12 dishes for you to choose from. But quality is more important than quantity because each dish made me want to come back for more. 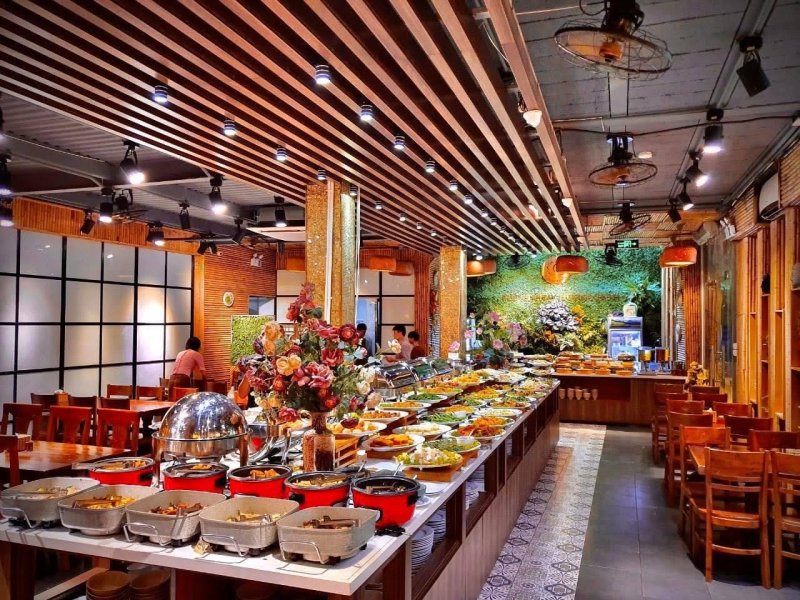 Huong Thien Vegan Buffet is a two-floor restaurant that can accommodate up to 300 people. No matter what day of the week is, the place is always filled with customers, especially on the 1st and 15th of the lunar month (Buddhism chooses these two days as the most common days for practitioners to eat vegan). It’s recommended to book a table in advance. I just came to Huong Thien for lunch on a regular Sunday with another friend, but we still had difficulty finding a table and had to sit with two other strangers.

When I first set foot into Huong Thien Vegan Buffet, I was immediately amazed by the variety of dishes. It felt like we had a buffet at a hotel, not a regular vegan restaurant. At the price of VND 120,000 (~$5), you can try up to 30 different dishes, which is a real bargain. 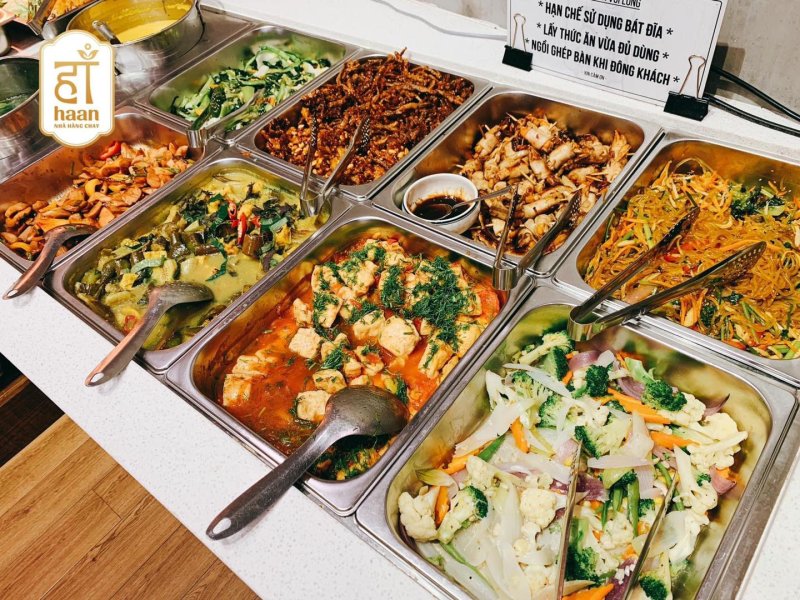 When you reach 71 Dao Tan, find the wooden door leading to Haan.vegan. There are two floors for eating; the first floor includes both the buffet section and dining tables. From my previous experiences, I visited the restaurant at lunch on a weekday, so there were plenty of seats, and the food was quickly replenished.

Haan prepares a different menu every day, but expect to see at least 15 different meals. My favorite dishes were banh cuon and creamy corn soup. Their fried dishes are also worth trying, such as fried tofu, mushroom prawn crackers, etc. However, I think there is a lack of boiled or steamed dishes and a bit too many fried and oily dishes. 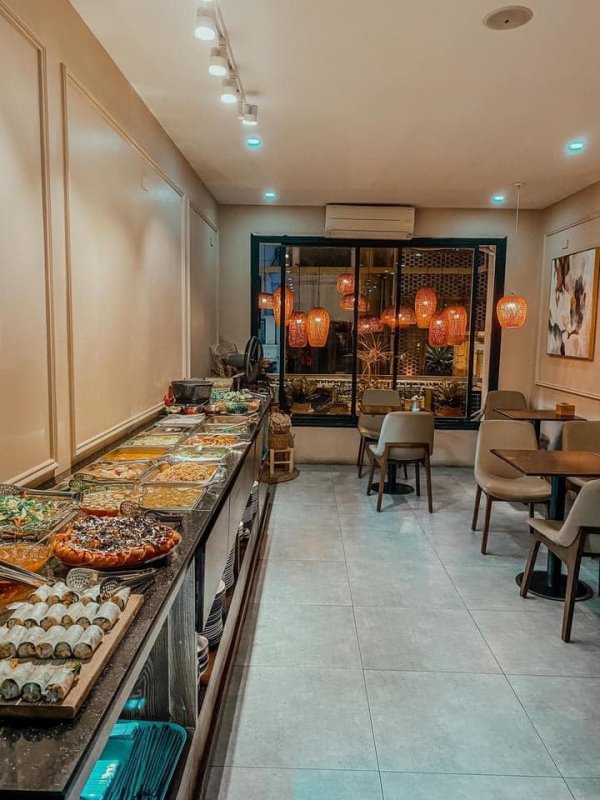 In the heart of Hai Ba Trung district, D've Buffet Chay is the one to go. The restaurant exudes that cozy feeling, almost feeling like home. The menu is altered daily, including around 15 dishes (excluding desserts). The most common assumption of vegan dishes is that they are bland, but D've proved that wrong. Each dish is full of flavor, from sweet and sour to spicy.

In addition, the restaurant also offers lunch boxes for office workers at the price of VND 60,000 per set. You can also choose to enjoy a vegan hotpot with multiple options for 2 to 5 persons. 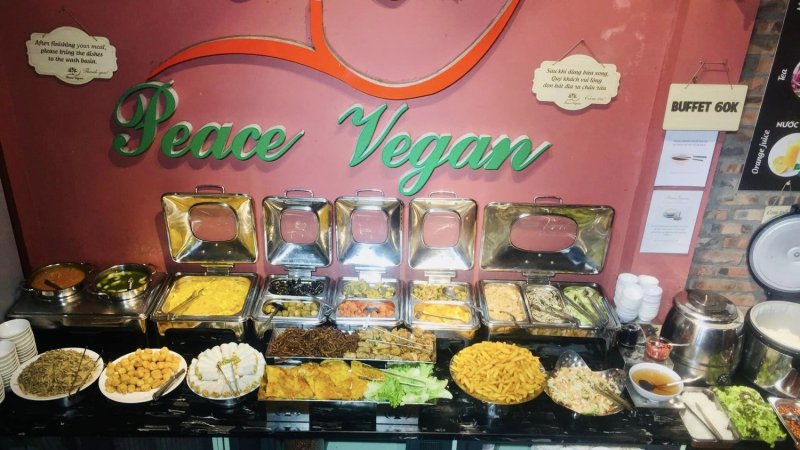 At Peace Vegan, self-service is the keyword. After buying a ticket, you will be given one plate throughout the meal. To protect the environment, Peace Vegan still allows customers to take food multiple times but use one plate only. From the beginning to the end of your meal, you will choose your food, select your seat and even clean your plate. With this self-service concept, Peace Vegan has a lower price than other vegan places, but it still provides customers with mouthwatering dishes.

With the motto of “Eating vegan to protect the environment,” the restaurant strives to bring the best service to diners and hopes to educate more people about the importance of environmental protection. Reservation at Peace Vegan is only available for more than 15 people. Quick note, you cannot reserve tables during the 1st and 15th day of the lunar month.