The charging station is equipped with one 150-kilowatt superfast charger and five 60-kilowatt fast chargers, which can serve 12 vehicles at the same time. The station is said to have met European safety standards in terms of power supply and fire and explosion prevention, electric leakage, and waterproofing.

VinFast Trading Vietnam general director Hoang Chi Trung said that the new station is a “premise for VinFast to create a comprehensive electric vehicle support system,” which will provide a flexible, convenient, and accessible battering charging experience for all VinFast customers, a Vietnam Insider report read.

PVOIL meanwhile said the cooperation between the petrol company and the car manufacturer proves their mutual commitment to adapt to the clean energy transition.

Besides PVOIL, VinFast is also working with Petrolimex to build charging facilities at some of its 5,500 stations in Vietnam. 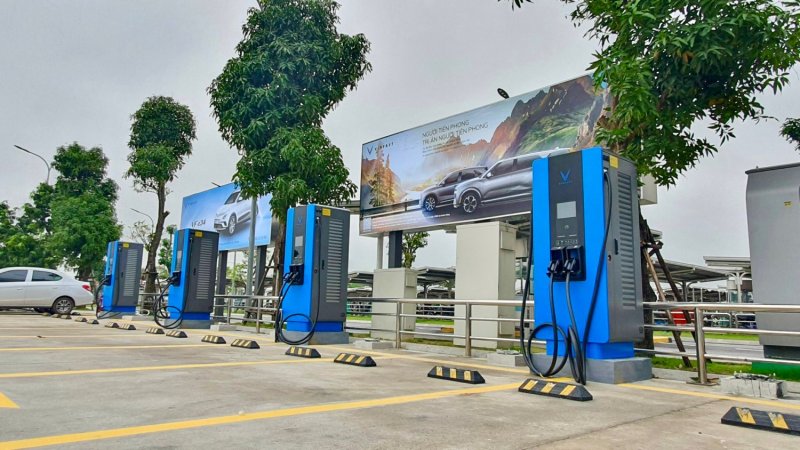 VinFast aims to install 150,000 charging ports covering 63 provinces and cities across Vietnam within 2022. It has already started installing chargers on parking lots, commercial centers and rest stops on major highways for electric cars and motorbikes. Electricity used for charging stations is paid according to the price of electricity produced.

VinFast is the only car company in the country that provides charging infrastructure to accompany its EV models. It has launched a range of fully-electric vehicles for different segments: VF 5 (segment A), VF 6 (segment B), and VF 7 (segment C); and two models VF e35 and VF e36, in the D and E segments have now been renamed VF 8 and VF 9.

The domestic automaker, which has also already established a strong presence in the US and European markets, affirmed that “2022 is the right time to invest in electric vehicle charging stations,” given the rising gasoline prices and people’s growing interest in green mobility.

The national government has also been very active in pushing for battery-powered EVs in Vietnam. It has exempted EVs from hefty registration fees for three years starting March this year. The fee shall be paid at a rate equal to 50% of the fee for petrol and diesel-fueled cars with the same number of seats over the next two years.

Vietnam is striving to boost its electric vehicle market to catch up with the global trend in the auto industry and to assert its commitment to reach net-zero emissions by 2050.